“The great thing in this world is not so much where you stand,
as in what direction you are moving.”
~ Oliver Wendell Holmes~ 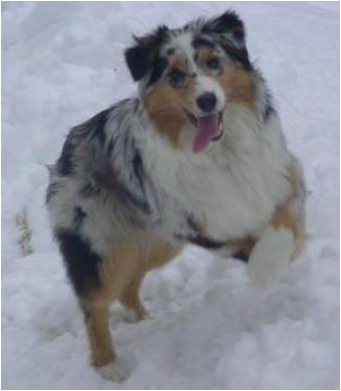 Schaefer's Aussies and now Miniature American Shepherds, I have Trained, Shown, and Trialed the dogs I have owned in AKC, Canada, UKC, ASCA, USRC(Rottweilers), successfully since 2001.

Before my dogs are considered for breeding, they have a minimum of hip and elbows passed by OFA, genetic testing and they have had their eyes CERF'd. However you will see more health tests completed before the breeding ever takes place.

I only breed dogs that I feel are a good representative of the breed, which includes temperament/health/breed standard, regardless of how many titles I have put on them or health tests they have passed.

All puppies are raised following a modified Puppy Culture method.  They whelped and raised in the house under foot (not in a kennel), so they have plenty of socialization, are started on housebreaking and crate training before leaving for their new home at 8 weeks.